Dovetale Press carefully constructs books for the reader who might find standard books difficult because of certain health conditions, such as Alzheimer’s disease, other types of dementia, or stroke. Classic literature has been specially selected and adapted by an applied linguist, Dr Gillian Claridge, and a psychogeriatrician, Dr B. Sally Rimkeit, to enhance the joy of reading for people with cognitive impairment.

Our Kickstarter Campaign has been very successful, thanks to the wonderful generosity of the donors. People living with dementia now have the pleasure of sharing a great read at participating public libraries. Please click here to find out more.

And on July 18th, TV1 broadcast a news feature showing Dovetale Press books in use by a dementia-friendly book group in the Kilbirnie Public Library.  Click on the link to see some people living with dementia reading aloud from the Dovetale Press adaptation of Charles Dickens' A Christmas Carol. Click here to view.

Dovetale Press carefully constructs books for the reader who might find standard books difficult because of certain health conditions, such as Alzheimer’s disease, other types of dementia, or stroke. Classic literature has been specially selected and adapted by an applied linguist, Dr Gillian Claridge,
and a psychogeriatrician, Dr B. Sally Rimkeit, to enhance the joy of reading for people with cognitive impairment.

The following video shows the enjoyment that people living with dementia can have when sharing classic stories. 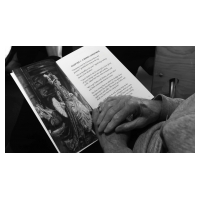 Testimonial from a Bupa Home Facilitator:

Below are comments made by an activity coordinator at a Bupa Care Home in New Zealand after reading the Dovetale Press adaptation of A Christmas Carol with a group of residents living with dementia. This activity was part of an international study to see if reading improved their quality of life.

She says: The book was edited so that it could be read and discussed in two sessions lasting between 45 – 60 minutes. It had a list of characters at the beginning, and at the end of each chapter there was a summary to remind people what it was all about.

Even though it was substantially shortened, it still held the essence and original language of the story, allowing the emotions and drama to come through to the readers. It also had a rich selection of illustrations to add to the reading experience.

Residents were invited to share the reading out loud of the stories and poems with the facilitators, and it was interesting to hear how different people read a story. I felt I knew who had read a great deal to children and grandchildren!

Reading A Christmas Carol led to comments being made about how times have changed, both in the way people talk to each other, and the differences in society and status. There were lots of reminiscences about childhood and early schooldays, some enjoyable, but some rather more poignant memories.

Once the ice had been broken and the first comment made, there was no problem in each of the residents contributing to the discussions, and certainly, one anecdote led to another very easily. When I asked a question of each respective participant, it was pleasing to note that much thought went into the answer, and I could see that memories were being ‘trawled’ for the best response.

A rather lovely comment was made outside the reading session, where one person said that despite knowing another for quite some time, how much more appreciation was felt for this person following the reading sessions, and how important it was to have had an insight into that person’s life.

At the end of the study, I certainly had the impression that a regular reading and discussion group should be incorporated into our activities calendar. The enjoyment of sharing the reading was very apparent, but I think more importantly, the stimulation of memories and discussions in a friendly group will lead to closer friendships and more meaningful social interactions.

Books from Dovetale Press are used in an international study of reading and dementia and profits from our new series are used for this study. Bupa Care NZ has helped sponsor the study. Click here to view our books

Our dementia-friendly books are also available at Book Depository https://www.bookdepository.com/publishers/Dovetale-Press and Amazon https://www.amazon.com/s?k=dovetale+press&ref=nb_sb_noss